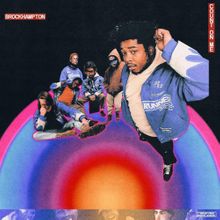 “COUNT ON ME” is BROCKHAMPTON’s second single from their sixth studio album, ROADRUNNER: NEW LIGHT, NEW MACHINE. The song features only two of the seven BROCKHAMPTON vocalists but features verses from A$AP Rocky and SoGoneSoFlexy, as well as uncredited vocals on the chorus from Shawn Mendes and frequent collaborator Ryan Beatty

This is the first collaboration between Shawn and BROCKHAMPTON, fans and Kevin alike have been anticipating the collaboration since Kevin mentioned Shawn in one of their biggest hits STAR from their critically acclaimed 2017 album SATURATION saying:

A snippet of the song was first leaked in December 2020, containing a portion of Rocky’s verse and bearface vocals. Lyrics from Flexy’s verse, as well as the song title, were accidentally revealed by HK in an Instagram live with Kevin Abstract on February 23, 2021.