It was a five-star performance for Liverpool as they thrashed their rivals at Old Trafford with goals from Naby Keita, Diogo Jota, and a hat trick from Mohamed Salah. 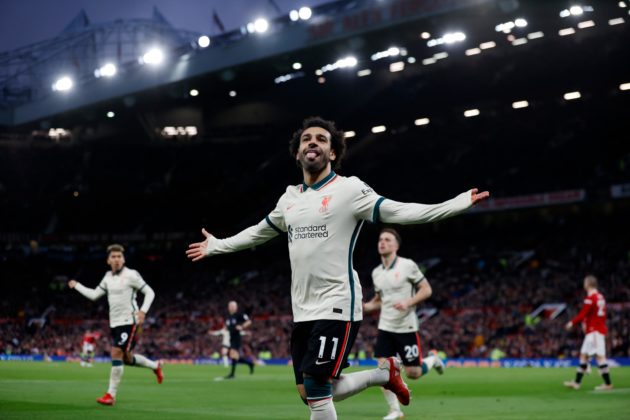 Liverpool was coming into the game with more confidence than Manchester United following the recent run of results from both sides. The Reds have not tasted defeat in all competitions this season while the Red Devils have won just one win in their last four league games, which came against West Ham at the London Stadium.

Bruno Fernandes almost scored the opener of the game, but he blasted the ball over the bar. Liverpool punished United on the 7th minute as Naby Keita silenced the home side as he connected to a ball from Salah to get the ball past De Gea in goal.

It turned from bad to worse for Manchester United as Trent Alexander-Arnold finds Jota who makes it 2-0 for Liverpool.

It went from bad to worse for Manchester United as Mohamed Salah scored a brace in the last ten minutes of the first half. Liverpool went into the break leading their hosts 4-0.

The second half saw the introduction of Paul Pogba, who was brought in for Mason Greenwood, but that did not change anything, for Salah scored his hattrick with just two minutes of play after the break.

Paul Pogba was sent off from the game on the hour mark after he went into a harsh tackle on Keita. The Guinean came off the worse of the challenge as he could not continue the game.

Liverpool enjoyed most of the possession, following the red card to the French midfielder. It was almost a sixth goal for the Reds on the 70th minute, but a brilliant save from De Gea denied Trent the chance to find the back of the net.

The game ended 5-0 in favour of Liverpool against Manchester United. The Red Devils have only managed a draw in their last four games.

The Reds are second on the league table behind Chelsea while Manchester United are placed in the ninth position with 14 points after nine games.