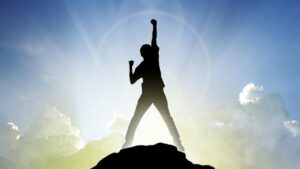 Little is more when God is in it!

There are moments we have questioned God on how we would become successful, there are moments that seem as though we are stagnant and there is no possibility of moving forward because we are so uncertain of what the future holds and we don’t seem to believe in ourselves and we have defined ourselves by our current situation, state of mind, peace, vibes, happiness and activeness and this makes all our effort abortive and frustrating.

I tell you there is more in the little you do no matter how minute it seem. Although it could be frustrating because at times it would look as if you are still in the same position but guess what you are not, if you can remember vividly who you were in past and compare your growth to who you are currently or are there some changes you discover that cannot be measured to what you were not capable of doing, certainly there are evident changes in the way you perceive things, the way you think or react to situation, the things you get yourself involved with, your daily routines you constantly engage in shows you have outgrown. I can possibly tell that it could be that you are comparing yourself to someone who has gone before you and it is  distracting you from thinking right.

You do not have to compare yourself with anyone, we have “DIFFERENT PERSONALITIES, DIFFERENT HISTORY, DIFFERENT TIMING, DIFFERENT GOALS, DIFFERENT GIFTS, DIFFERENT DESTINATIONS, DIFFERENT GRACE, DIFFERENT FORESIGHT, DIFFERENT MENTORS and we all can’t arrive or get to the top at the same time, of course it’s either you get there before me or vice-versa.

When we weigh what can be done there is certainty that we are capable of doing more than our thoughts even more than what we’ve been measured to become.

You would feel fulfilled after you’ve been able to serve all not just with the gifts that has been deposited in you but with the level of being held accountable to loving who you’ve been created for.

At times those thoughts don’t just come naturally but it comes after we have allowed self doubt and we try to judge what others have done by criticizing their instinctive nature whereby we can learn from them without having the iota of guilt or pride.

Growth does not come naturally, it comes after some certain procedure or process has been put in place or considered. Those people who you feel are far ahead of you have been tried over and over again, undergone rigorous pains, they might have thought of giving up due to certain weakness or fear of failure. They did not get to that upper abode you’re eyeing. They got there with considerations like; THAT LITTLE PERSEVERANCE YOUR THOUGHT WAS A BIG DEAL TO YOU, LITTLE COURAGE THEY HAD IN THEMSELVES, LITTLE FAITH THAT MADE THEM TRUST THEIR INSTINCTS, LITTLE HARD WORK THAT KEPT THEM MOVING, LITTLE PRAYER THAT MADE THEM OVERCOME EVERY FORM OF IMPOSSIBILITY, LITTLE COMMITMENT, LITTLE CONSISTENCY, LITTLE DETERMINATION EVEN AFTER THEY’VE BECOME DRAINED AND BEATEN, LITTLE MEASURE OF ENDURANCE MADE THEM WHO THEY ARE TODAY.

You don’t desire for something to happen without paying the price. Efforts are meant to be put in place.

Little is more when God is in it! The Bible made it known that whatsoever you place your hands on shall prosper and that’s the evidence we have in the one who’s created us. And this shows that the little can become abundant.

When you become so thirsty for growth you don’t allow little things to disturb you or derail your pursuits you set the sail to the other shore to await its subtle productivity. So no matter the little you put it will surely yield fruit someway, someday.

Go rock the world because it awaits your greatness. Don’t let other peoples achievement or growth make you feel inferior they also deserve good thing as you deserve too, be open to learn from them.

So don’t give up or try to measure your growth with somebody else. You are all running at different acceleration.